Click here for a PDF of the Spring 2023 program overview

We will communicate the Zoom URL for each NCGS seminar  before the event via our NCGS list serve.

If you are not on this list serve please contact the NCGS graduate assistants KEVIN HOEPER (kjhoeper@live.unc.edu)  ask him to be added the NCGS list serve or request the URL for a specific event in the weeks before the event.  He and  MADELINE JAMES  (mljames6@live.unc.edu)  will also  take care of the  technology of the Zoom Seminars. For our NCGS Online Seminars Etiquette see here.

We a have a no-recording policy for all our events to create an open space for discussion. 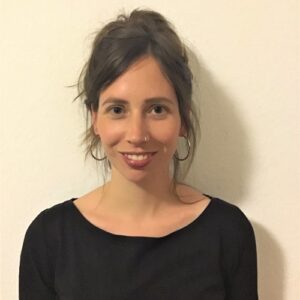 “We always also did this for our children”: Motherhood in the GDR between Socialism and Opposition

The presentation explores how GDR women dealt with motherhood and thereby, in conversation with and sometimes opposition to the state, renegotiated socialist modernity. East German women writers drew up alternative socialist versions of maternity, framing the mother-child relationship as a platonic partnership between mother and child and, in contrast to their Western counterparts, deemphasizing the bodily elements of motherhood. These positions toward motherhood and children were often politically in line with culturally hegemonic ideas about the socialist family that were promoted by the state. Yet, in the 1980s, motivated by intense maternal concern for their children in the face of growing Cold War tensions and environmental destruction, GDR women’s activists tried to actively intervene at the state level to improve the future of their children, thereby becoming involved in oppositional activities and ultimately contributing to bringing about the Wende.

YANARA SCHMACKS is a PhD candidate in Modern European History at the CUNY Graduate Center in New York. She is working on a dissertation titled “Reproductive Nation: German Motherhood, Erotics, and Ecology between East and West,” exploring how the maternal served as a space for the renegotiation of both the German past as well as the East-West divide and reunification. Her research was published in Central European History and in Psychoanalysis and History. She is currently a doctoral fellow at the Berlin Program for Advanced German and European Studies at Freie Universität Berlin.

PDF of the flyer

On behalf of the North Carolina German Studies Seminar Series, we are pleased to announce this year’s winner of the Konrad Jarausch Essay Prize for Advanced Graduate Students in Central European History. In recognition of the longstanding commitment to graduate education of Konrad H. Jarausch, Lurcy Professor of European Civilization in the Department of History at the University of North Carolina at Chapel Hill, this annual prize serves to celebrate and cultivate outstanding new talent in the field of Central European history.

This year’s winner is Yanara Schmacks, a doctoral candidate in history at The Graduate Center, City University of New York. Her prizewinning essay, “‘We always also did this for our children’: Motherhood in the GDR between Socialism and Opposition,” is drawn from her dissertation project, “Reproductive Nation: German Motherhood, Erotics, and Ecology between East and West.” Focusing on the period from the mid-1970s to the early 2000s, this project aims to explain why the West German understanding of motherhood replaced the socialist East German one after 1989, resulting paradoxically in a socially liberal reunited Germany with surprisingly restrictive policies on reproduction and the family. Moreover, the project’s careful consideration of the intellectual and cultural dimensions of the different versions of motherhood promises to illuminate in new ways significant political conflicts and social questions concerning nature, ecology, race, and national identity that attended the process of rapid German unification.

In her prizewinning essay Schmacks argues “that motherhood in the GDR was not, as is often assumed, merely a pragmatic, non-emotional affair limited to [a] ‘normative concept of working motherhood.’ While the socialist state’s . . . family politics indeed revolved around the ideal of the ‘working [mother],’ GDR women writers and activists continuously renegotiated the cultural meanings as well as the moral and emotional stakes of motherhood beyond the state-decreed ideal.” Schmacks traces these renegotiations through both insightful readings of novels of GDR literary feminists from the 1970s and 1980s and careful study of the Women’s Peace Movement’s involvement in the 1980s in issues ranging from abortion, new reproductive technologies, and increasing medical control of the female body to militarism’s unwholesome effects on the education of young children and the arms race’s threat to their future well-being. The committee, in selecting Schmacks’s essay, unanimously praised its deft interweaving of archival and literary sources, its rigorous analysis of complex social issues related to motherhood in the late GDR, and its impressive originality.

An Open Letter: in Solidarity against Racism

We hope that this message finds you safe and healthy in these turbulent times in which different crises currently combine to show us, once again, the systemic and institutionalized racism of politics, economy and society in the United States. Along with the rest of the world, we have been outraged and deeply affected by the recent events. The killing of George Floyd and the violent response of the police against mourning and protesting demonstrators are appalling and troubling. We are therefore reaffirming our commitment to support the struggle against racism and anti-Blackness here and elsewhere on the globe.

The NCGS Steering Committee is committed to countering racism, anti-Blackness, and violence at home, in Europe, particularly Germany, and across the world. We aim to foster dialogue on, and broaden the visibility of resources about the history of structural racism, anti-Black violence, and many related issues.

Germany’s twentieth century history has much to teach us about the rise of Nazism and more current populist right wing movements and their inherent racism, as well as about the persistence of structural racism and the difficulty of combating it. It shows that the only way forward is to address and study, without any hesitation, the dark past—discussing it in public, even if this courts controversy, in order to teach not only students but also the broader public. This was and is a painful process for the racially discriminated, suppressed, and killed minorities: in twentieth century German history mainly, but not only, Jewish people. It is also painful, and necessary, for the descendants of the discriminating, suppressing, and persecuting majority, who are not only forced to confront the history of their ancestors, but also their own prejudices and ongoing, often unwitting, racist thinking and behavior. German history also shows that a democratic civil society, including critical media and very active grassroots movements, are needed to foster change. In Germany, as in the United States, this work is not complete, as right-wing populism, xenophobia, racism, and antisemitism are rising again.

We therefore strongly support the current movement of the Black community and their interracial coalitions in the United States whose members have been trying to come to terms with their pain, anger, sadness, and frustration over a struggle against racism and inequality that has persisted on American soil since the seventeenth century. Everybody who stands behind this agenda needs to support this movement and listen and learn from its proponents. Its calls can and should not be ignored any longer.

On behalf of the

The open letter as a  PDF